This sound weird but when it comes to technology, nothing is impossible except it has not been reasoned.

According to US researchers, A new smartphone device can analyze a man’s sperm quality and let him know in a matter of minutes whether he suffers from infertility. 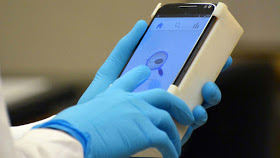 This technology aims to make it easier for men to test their sperm at home because 40% of fertility problems are due to poor quality sperm which affects over 45million couples worldwide.
The test, however, “can analyze a video of an undiluted, unwashed semen sample in less than five seconds.”

It works by using a combination of an optical attachment that can connect to a smartphone and a disposable device for loading a semen sample, said the report.
Researchers tested the device using
350 semen specimens at the Massachusetts General Hospital Fertility Center.

The smartphone-based device detected abnormal semen samples — based on World Health Organization thresholds on sperm concentration and motility — with an accuracy of 98 percent.

The cost of the materials used to assemble it came to $4.45.
The device is not yet available to the public and is still in the prototype stage.