Nigeria’s popular network provider, Globacom, has been called upon in an Instagram post made by one of their customers, Kehinde Rhoda Akinrinmade, who says she wants to be signed as an ambassador for the brand.
Kehinde, who is on Instagram as kennyrhoda2, posted the image 4 days ago, Wednesday, June 1, urging the company to grant her an endorsement deal as a reward for her loyalty, as she has never received “any better thing” from them despite having recharged several times.

“My Love for Glo network no be today oh, but I never receive any better thing from Glo…

“All these recharge cards are mine, everything loaded on my phone . Please people help me push it till it gets to Glo, I want endorsement ooooh” 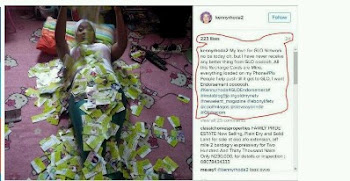 She then proceeded to tag some media houses and personalities, obviously to make the post go as far as possible, and eventually reach the right quarters.

Who knows, we might just be about to discover the new Jumoke Orisaguna