Skip to content
Chinese phone makers Gionee has launched a new member of its A series called A1 lite, it’s a mid-range device but with decent specs as it’s powered by MediaTek MT6753 chipset and sports a 5.3-inch HD display. The phone is a miniature of the Gionee A1 Plus with similar but a bit lower specs. 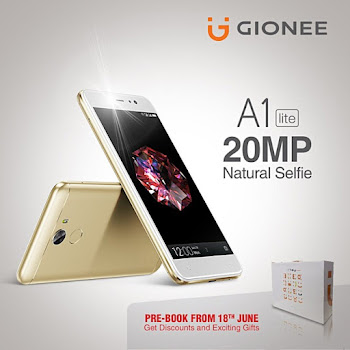 Gionee A1 Lite has 3GB of RAM, with 32GB internal storage. Now one of the key features of this phone is the massive 20-megapixel front selfie camera coupled with a 13-megapixel main camera at the back for capturing your great moments anytime anyday. The smartphone runs Android 7.0 Nougat out of the box (with Amigo 4.0 UI on top). As expected from a Gionee phone, it has a 4,000mAh battery capacity which is expected to carry you for the whole day on a single charge