Skip to content
I know you might be aware of this package because it has been in existence since 2014 but if you are hearing it for the first time, let’s welcome you to “Airtel WTF data bundle”

The plan is made for peeps that are always using social media apps 24/7 as you can facebook, whatsapp, tweet and even use BBM with this bundle.

How Many MB Is On Airtel WTF Data Bundle?

This has been a major debate since the introduction of this plan by airtel. The Nigerian Telecommunication Network said it’s unlimited when it was initially introduced but later some people realized it is data capped at 30MB for the 14 day plan which goes for N100 while the monthly data plan is capped at 80MB and goes for N200

But Why Did I Say It Is Unlimited?
A friend of mine recently told me that he is now using this airtel WTF package unlimitedly for a couple of months now and he was also able to use it to browse the Internet unlimited. So i decided to try it with one of my airtel SIM cards. I subscribed for the monthly plan which is 200 Naira and since then i have been using it brows on the phone as well as for social media. I did it for two more people and they are currently rocking it unlimited so i decided to share with you guys so that you can try it out. 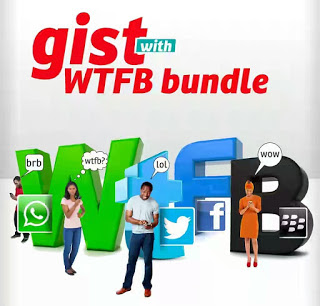 How Can I Check The Data Balance?

How To Browse Unlimited On The Internet With It

As i told you earlier, you can browse with this plan which is only meant for social media but the trick is changing your airtel APN to the right one and use Opera Mini to brows as it doesn’t work on UC browser. Am still trying to see how to use it on PC and maybe use it to power all applications using VPN apps like Psiphon and Netloop.

Use this airtel APN – internet.ng.airtel.com

I think this is cool if you successfully do it on your SIM. Let’s see how far it will go.