Skip to content
Categorically speaking, I don’t think there is anywhere you can get 36GB worth of data for N6000 but Airtel is offering you 36GB + 15,000 airtime free of charge if you spend only N6000 to buy this easy to use smartphone called Fero 1801. This is the latest promo from Airtel NG. 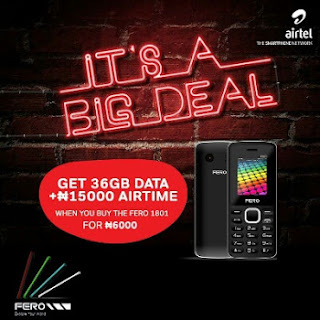 Fero F1801 is one the most basic Phone from Fero . It comes loaded with Wireless FM and a 32MB of storage expandable up to 32GB via MicroSD card. The dual SIM enabled Fero F1801 features 1.8 inch and powered by a 1,000 mAh battery . Like other basic/feature phones from Fero , the Fero F1801 has a 1.2MP camera .

Highlight of Specs of Fero 1801

Note: The validity period for the Airtime and data is 6 months

This offer is specially for those who spend more than N6000 on data and airtime monthly and also have stable airtel network coverage in their various locations.

What do you think about this bonus?