Skip to content
A new update for the Infinix users especially those using the Note 4 smartphone. There is a new development that very soon you will be able to upgrade your device to the latest Android 8 Oreo. 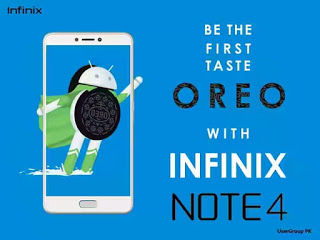 Infinix mobility is working on the beta Android 8 Update for the Infinix Note 4 X572 device which was released last year. Below are some of the key specs of the device.

The Note 4 packs 13MegaPixel back Camera AutoFocus probably with a Dual LED Flash for bright Night shots, while in the front you also have 13 MegaPixel AF camera with a soft flash. Both Infinix Note 4 and Note 4 Pro will feature 3gb/4gb RAM and 32gb/64gb internal storage. One of the reasons why Note 4 is similar to Galaxy Note 5 is the addition of X-Pen which brings more swag to the Phablet. The device comes with massive 5050mAh capacity.

Infinix which is a popular device had to bring up the update for users and some have started receiving the beta update.

Samsung devices are also yet to release Android 8.0 Oreo especially the J7 smartphones. With this infinix update, they should think of updating some smartphones.

Meanwhile, the company has not officially made a report when they will release the update. They might start with the beta update first.

What do you think of Infinix Note 4 X572 Update?