Celebration in king power stadium as Leicester city are crowned league champions.
It was indeed a do or die affair at Stamford bridge as Tottenham were at the verge of losing the title race. After a 2-2 draw at Stamford bridge, Spurs lost their spot in the season’s number 1 position, Leaving the foxes at the top of the league. Leicester city have now been announced as the league champions. A team that battled their way out of the relegation zone last season, now have come from behind to take the league. For the first time in their 132 years of existence. 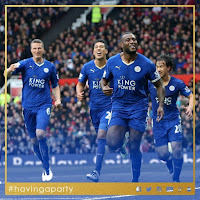 What a resilient team, kept their composure kept their balance and now they have the league.
Wow I’m short of words.
Lessons
• Never give up in life
• Hard work pays
• Never look down on yourself
View more