Skip to content
Apple has released a newer version of their latest OS (iOS 11.2.6) for iPhone, iPod and iPad devices. Generally, every Apple product operating on their iOS is expected to get the update. The update has some minor but important fixes. 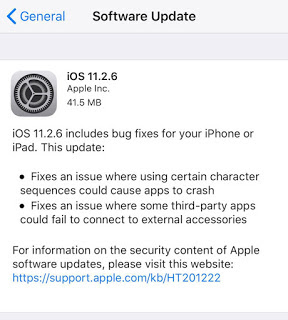 This new iOS update wasn’t in beta or oxygen test before released to the public. Instead, it is currently tested by the developers.

Features of iOS 11.2.6 Update
✔️ Fixes an issue where using certain character sequences could cause apps to crash.
✔️ Fixes a issue where some third-party apps could fail to connect to external accessories.

The iOS 11.2.6 update fixed bugs on iPhone and iPad. The character in the Telugu language causing apps to crash has been fixed by this update.

iOS users, it is time to update to the latest version. I’ve had a personal experience with an iPhone device. And I can confirm that when ever an update is available, it usually fixes the issues it is intended to fix.