Skip to content
Whatsapp team are really trying out fun stuffs and making the UI very interactive and friendly for users, WhatsApp hits 1.Billion daily active users. It is another milestone achieved by the company today. As at last year, WhatsApp had 1 Billion monthly active users and now, the growth is tremendous. 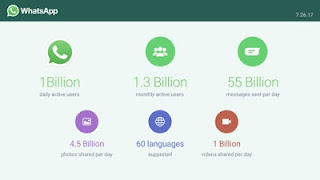 According to a source, the Facebook-owned company announced this milestone, also stating that the monthly active user base has increased to 1.3 billion. Furthermore, almost 55 billion messages are shared every day in 60 supported languages. Videos shared per day are now at 1 billion, and photos shared per day are at 4.5 billion.
According to WhatsApp in a blog post, Just last year, we shared that one billion people around the world use WhatsApp every month. Today, we are excited and proud to share that one billion people around the world use WhatsApp every day to stay in touch with their family and friends.
For comparison, Facebook announced back in June that it’s now at around2 billion monthly users as Facebook Messenger alone surpassed 1.2 billion monthly users as of April. Instagram separately announced in June that it was at 250 million daily active users, and Snapchat announced 166 million daily active users as of its last announced numbers back in May.