Whatsapp was bought by Facebook for $19 billion few years ago and since then, so many new features and improvements has been added and the latest on the card will be video calling features.

In the info graphic report, Whatsapp defeated Facebook messenger by a significant margin, Messenger leads few African countries like Tunisia, Algeria, Cote d’Ivoire, Guinea Republic, CAF and Liberia, and aside from the aforementioned nations, they also have an edge in about 43 countries.

Did you notice where BBM is? Of course i know that BBM is drastically going down by the day and it is shown on this SimilerWeb findings as it has lost its control in Africa Although in some parts of the world like Indonesia, the app is used on 87.5 percent of Android phones.

So as of today, whatsapp is still the winner when it comes to the instant messaging business and Mark Zuckerberg is a real genus in the social networking planet.

Whatsapp is still growing and only time will tell how far it will go especially when the whatsapp video calling features is finally added. Do you still remember 2go messenger? Lol how time flies. 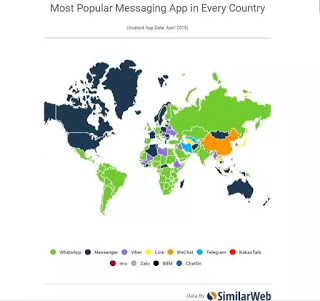